Without a doubt, the best ant killer will help you kill the ants running around in your kitchen, bathroom, Lawn, front porch, etc.

The ant foragers are attracted to the sweet TERRO T300B bait, which they eat and drop the ‘trail pheromone’ to their nest. The trail enables the worker’s ants to locate the food outside their nest.  Read also: Flying Ants vs. Termites.

In a Hurry? Check these Cat Flea Shampoos

The first thing you need to know when you want to buy an ant killer for your home is that they come in different forms- gel, spray, dust, granules, and self-enclosed bait.

Also, you can place the bait at a location where there are many ants. Further, the bait has a unique design that prevents it from drying out. The manufacturer outlines that the TERRO T300B Ant Bait will wipe out the ant colony in weeks upon application.

Working Mechanism: The liquid TERRO T300B bait is considered a better option as it will be readily carried by the ants back to the mound and thus kill more than the ants you can see.

The TERRO T300B acts slowly to enable the worker to make several trips to and from the food and thus supply the whole colony with adequate bait to kill them.

However, you’ll need to remove all the food items in the kitchen from areas easily reachable by the ants.

The active ingredient in MAXFORCE ANT Gel is a Fipronil that kills a wide range of ants, including Honey, Ghost, and Argentine ants.

Do not worry if the bait will wipe out the whole ant colony as it will be effective or about 14 days. However, you’ll need to inspect, within that time, if the gel requires reapplication.

The ant gel will slowly kill the ant colony from your kitchen. Equally, any ant or insect that runs through the kitchen or application area will carry the chemical to the nest’s others.

Hence, you have to start using the MAXFORCE ANT Gel to kill a broad range of ants in your kitchen. 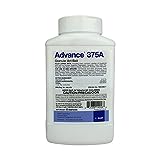 Advance Granular Bait can be used in your yard to get rid of most pests and ants such as black ants, Argentine ants, fire ants, pharaoh ants, carpenter ants.

Advance Granular Bait is poisonous to beneficial animals such as bees but not toxic to use around humans and pets.

The biggest disadvantage to this ant killer is that some ants ignore the granules because it is either too big to carry or because it is not sweet (it is protein-based).

Ants prefer sweet substances; they easily get attracted to such. Also, you will need an extra device ( a spreader) to spread the granules.

You can sprinkle the granules on shrubs, trees, wall cracks, crevices, and other places that ants like to hide. For best results, use it both indoors and outdoors simultaneously.

Raid  11717 Aerosol ant and roach killer is an indoor pyrethroid insect killer that contains Cypermethrin and imiprothrin. Cypermethrin is an effective chemical that kills ants and other insects on contact.

Raid ant and roach killer do not leave a lingering odor or oily residue on surfaces. It has a light lemon scent that is pleasant in the home.

This aerosol spray comes in an easy-to-use canister, so you don’t have to worry about touching the liquid spray. However, it would help if you sprayed it away from people, food, pets, and dishes.

Also, it is easy to target the infected areas, hard-to-reach places, and ants. It is recommended that you spray about 18 inches away from the insect.

Aside from ants, it can also kill other indoor flying and crawling insects and pests such as crickets, spiders, water bugs, roaches, silverfish, among others.

Safer Ant Killer Diatomaceous Earth is a natural alternative for getting rid of ants in your home. It is made of fossilized diatom powder, which is naturally sourced fungus.

It has no toxic elements making it safe to use around your kids and pets. The powder may look and feel soft when you touch it but has razor-sharp edges, which pierce the ant’s exoskeleton. They then die out of dehydration.

Safer Brand 51702 is safe to use in vegetable and fruit gardens as it does not contain any chemicals. The USDA has approved it for organic gardening, and it is also OMRI-listed.

Since it contains no chemicals, there is no likelihood of insects developing resistance or building immunity against the product.

If your home is heavily infested, it may take several days or even weeks before this ant killer eliminates the ants.

Since it’s a powder, it will obviously leave some residue, especially if you spread a heavy coating. Use a damp towel or a filterless vacuum cleaner to clean it up.

The only downside to this ant killer is that it does not kill the ants from the source- colony and queen. So chances of re-infestation are high. 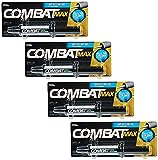 Combat Max 27 Grams is an ant killer that comes in the form of a gel in a  syringe. The syringe contains 27 grams of Fipronil, a high-water content poison.

The gel is slow-acting, so it gives the ant enough time to return to the colony where they will obviously share the poison, and in just 3-5 days, the colony and the queen are all dead.

Combat max is safe to use around kids. It is a childproof safety mechanism that stops kids from opening the device and squeezing the gel.

The gel applicator is easy to use and allows you to target the ant’s hideouts- cracks and crevices. For maximum effectiveness, apply the gel directly on the ant tracks and mounds.

You can use the Combat Max 27 Grams to eliminate ants both indoors and outdoors.

It’ll kill various ants like black ants, pharaoh ants, and carpenter ants. Bear in mind, however, that this gel can stain your tiled surfaces. It is also not ideal for large ant infestations.

The Amdro Home Perimeter is a slow-acting poison that prevents ants from coming into the house for up to 3 months.

Once the worker ants feed on it, it gives them enough time to transfer the bait to the rest of the ants, thus eliminating the ant queen and her entire colony.

The downside, though, is that it’s easy to over-pour, so you must be able to determine how much is enough to put around your house. Also, it is not safe to use around animals.

The Amdro ant comes in a 24-ounce block that covers an area of 1080 linear feet. Since it’s bait, it may take up to two weeks for the block to get rid of the entire ant colony.

It leaves no lingering smell and no residue. The granules, however, shouldn’t be used when the ground is wet. Use it only when you are sure there won’t be rain in the next 24 hours.

The active ingredient, 0.88% hydramethylnon, is a chemical pesticide that shouldn’t be used around children, pets, livestock, or gardens where food is grown.

TERRO T300 Liquid Ant Baits targets both indoor and outdoor ants. It kills the foragers and the queen.

The active ingredient, Borax, is a highly sweetened substance that attracts ants very fast. Once the ants consume it, they carry it to the other unsuspecting ants in the nest where they share it. And in just three days, they are all dead.

The 6-pack comes with a pre-packaged bait that is ready to use. The bait leaves no mess and is pretty easy to use- place the bait on the target area.

Some of the bait stations you can use are along the baseboard, on windowsills, under sinks, and appliances. This ant-killing solution is, however, not ideal for a heavily infested home.

Some ant killers will also only kill the ants that you can see (foragers), while others will also get rid of the colony and the queen.

Well, with these in mind, here are factors you should consider when choosing the best ant killer for your home.

a) The Type of Ants in your home

Like other creatures, ants come in many different species- more than 12,000 species to be precise. Therefore they will not react similarly to a single ant killer.

For instance, Advance Granular Bait may not kill the Pharaoh ants but when you use it on, say, fire ants or Argentine ants, it works.

You may find that if you use the Safer Brand 51702 granules, some ants may ignore the substance but get baited very fast by Combat Max because of the lovely smell.

b) Safety around kids and pets and Cost

You obviously want to consider the safety of your pets and family when purchasing an ant killer. Some pesticides have very toxic chemicals that can be poisonous to either your pets or your family.

If you have children, especially toddlers, you want to avoid pesticides like Advance Granular Bait because kids can easily play around with the granules.

A word of advice, the cost of a pesticide does not automatically translate to its effectiveness, so choose what seems right for your needs.

d) How fast do you need results and Effectiveness

Ultimately, you want all ants to be gone, but how fast do you want them gone? A pesticide can either be slow-acting or fast-acting.

Ant killers that work very fast are like The Raid 11717, which kills on contact, and slow-acting ones are like the Advance Granular Bait. Slow-acting pesticides release a poison that takes time to kill the ants.

A pesticide may be slow-acting, but its effects last for long. A good example is the Amdro Home Perimeter, which keeps your home ant-free for up to 3 months.

The fast-acting ones may leave some room for a re-invasion since it does not eliminate the colony.

If you want a quick fix solution, go for fast-acting pesticides, but if you want a long-term solution to your ants’ invasion, go for slow-acting ones that get rid of the entire colony plus their queen.

It would help if you established how effective an ant killer is before picking it; otherwise, it would be of no use.

Getting rid of ants shouldn’t be such a painfully time-wasting process. All you need is an effective ant killer specially formulated for the ants in your home. Use our buyer’s guide to know how to choose one that is right for you.

link to How to Get Rid of Gnats: Once & for All

Rentokil provided various services for controlling and preventing pests like termites, roaches, and ants.  In this article, I will review Rentokil pest control on its suitability for bug...