Which bugs look like bed bugs? While there are many bugs you mistake with bed bugs, there are clear signs to tell them apart. Bed bugs are the size of about one apple seed.

We hate seeing bed bugs (check pictures) or even wake up to painful bed bug bites on the body. Sadly, the bugs are dangerous but equally elusive and tiny, and thus you must identify them effectively. 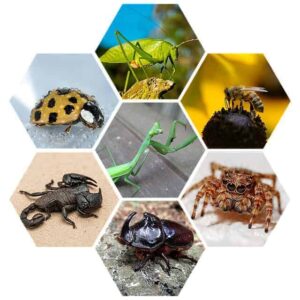 Compared to bed bugs, bat bugs have longer fringe hairs that are placed under the head. Further, bat bugs are primarily found on attics and feed on the bat’s blood.

Bat bugs may also suck blood from cats, dogs, and humans, too, if there are no bats within their close vicinity. But they also sized like an apple seed – that’s about ¼ inch.

As noted above, bat bugs live in attics or dark places where you’ll mainly find bats living or hiding. Also, they’ll only bite humans and your pets when there are no bats around.

Spider beetles are dark-brown in color and have the size and shape of fleas. After taking a blood meal, spider beetles look reddish and bloated – just like baby bed bugs. They mainly come due to poor sanitation.

Spider beetles will mainly be locations homes’ dark locations homes – they seem like smaller-sized spider – bombs, but their heads have long hair extensions.

Unlike bed bugs, spider beetles have wings, but just a few of their species can fly. The oval-shaped bugs measure about 1 mm to 5 mm. You’ll mainly find spider beetles around a good food source like wooden structures.

Further, spider Beetles come with thin plus long antennae and legs that are covered the bug’s hair. Also, the bug lacks ahead since its body is linked directly to its head.

Cockroach nymphs physically look white when they hatch and molt but will become reddish-brown – just like bed bugs. They love moist, warm areas with food, including crevices and cracks.

On the shape, cockroach nymphs are cylindrical and longer before molting (skeletal shedding), while bed bugs look like an apple seed or are oval-shaped and short in length.

Further, nutrition and environmental factors – besides species – may influence how fast the roach nymphs will molt into adults (maybe within months or years).

After molting into adults, the roaches will retreat to a cool and dark place to allow their outer shell to thicken and dry. Controlling these bugs requires you to target the roach eggs – use boric acid or roach killers.

Ensure the environment is clean and dry – avoid poorly disposing of any food waste as they may attach to the cockroach nymphs.  Further, seal off all holes and cracks the bugs may use to get into your house.

Fleas are slightly comparable to bed bugs – fleas measure about ⅛ inches in size but with a segmented and flattened body shaped, unlike bed bugs with an oval shape.

Fleas – particularly Ctenocephalides felis – are reddish-brown in color, with round heads and long legs. Fleas like bed bugs have no wings but will cause diseases.

Fleas will mainly live around pets (cats and dogs), outdoor spaces, and humans. Fleas are reddish-brown to brown colored and smaller in size – as outlined by researchers.

However, bed bugs are brownish-red to brown in color but will turn red when they take a blood meal. Further, fleas jump (16 inches horizontally and 8 inches vertically), but bed bugs don’t jump.

Carpet beetles are also brown, round-shaped, and small in size – but have wings, unlike bed bugs. They’re mainly found in clothing, carpeting, furniture, and fabric.

Carpet beetles won’t bite humans; however, their tiny hairs will cause welts for people with allergies. Carpet beetle larvae have the appearance of hairy caterpillars.

The oval-shaped bugs measure between 2 mm to 3.8 mm with white and black patterns plus red or orange scales. Also, unlike bed bugs, carpet beetles have wings and fly at day.

The bugs will mainly hide in carpet fabrics & fresh flowers. They have visible antennae that are short but have a hidden head. But carpet beetles don’t bite humans but may trigger allergic dermatitis.

On color, book-like are creamy yellow or pale brown – they y also look like termites (view termite kiers) – but have thin ananda plus long and bodies.

On size, book-like measure about 1 mm – 6 mm with their body and head being separate and segmented. Most of these bugs have no wings, but some have four tiny wings.

Book-lice love to stay in areas with damp books and high humidity mainly because they’re dehydrated. Further, dust plus dead bodies of book-lice could lead to asthma.

On the best silverfish repellent, you will not only acquire a quality product but also reduce the hassles of searching for the top choice solution. The current market is flooded with spray...

Unlike other big animals like mammals, it's not easy to tell male or female bedbug by just looking. On male vs. female bed bugs; female bedbugs have rounded abdomen while male counterparts have...