Flea bites trigger irritation and discomfort in dogs and cats. But do fleas bite humans and possibly transmit diseases like the bubonic plague?

In summary, the flea will bite humans to suck blood, leaving 3-4 clusters of small-reddish spots – particularly on the ankles, feet, lower legs, calves.

An adult flea can jump about 150x its height, but they’ll also easily move around by hitchhiking on humans and pets – mainly cats and dogs while moving around the house or yard.

With 3 months (their whole lifespan), adult fleas will bring forth 400 to 500 baby fleas. However, fleas are mainly left in your yard by wild animals like skunks, raccoons, and moles – check these durable moles traps.

Where Do Fleas Bite Humans?

So, is this the case for humans? Well, in this post, I’ve tackled this highly itchy question, “where do fleas bite humans?”

The short answer is, fleas will bite humans on their lower legs, calves, ankles, feet, and (though rarely) the head, groin, and chest area. 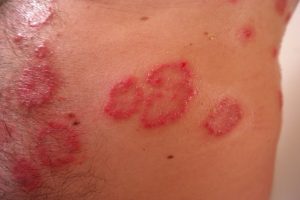 Therefore, rarely will the bites happen above the human knee unless you’re lying or sitting on the ground—Related: How to Get Rid of Fleas.

Fleas will bite and suck blood from any part of the human body. But, cat fleas will jump a maximum of 5.2 inches -7.9 inches. This height is merely just below the human knees, which means that’s where the fleas will land.

When fleas land on the human skin, the bugs start biting and sucking blood instantly without roaming or moving around carelessly. Hence, flea bites will occur more commonly on humans on the lower legs, calves, ankles, and feet.

As a rule of thumb, fleas won’t bite through your clothing – either various fabrics, socks, or jeans. But no too fast! Fleas might actually bite through your thin, loose-fitting clothes like yoga pants, pantyhose, and tights.

Fleas will generally move around while under the clothes and s stay in this hiding situation unless they’re biting your exposed skin.

Hence, putting on pants and socks will block fleas from biting you. But, these nasty bugs may still attack and bite you on any bare skin just above your sock line. You can prevent such flea bites by tucking the pant legs into your socks.

Fleas will rarely bite anywhere above the human. Despite that cat fleas can jump about 8 inches, it’s not so high of a jump to reach above your knees.

Therefore, fleas won’t jump enough to reach above the human knee, and thus most flea bites won’t be found in these areas. You can use flea bombs to control a major flea infestation in your house.

However, as noted above, fleas’ bites above your knee can be witnesses in cases where you’re lying or sitting on an infested place or near the flea bedding.

If fleas breed uncontrollably, they may spread in many areas and could bite humans on the upper legs, waist, head, pubic area, and the denser parts of their hairs on the chest.

Flea bites on the human head are rare because this body part is so far from the ground, and fleas can’t jump that high. For example, fleas could bite your wrists in some rare circumstances.

Nevertheless, such “high-octane” might still happen when a person is sitting on the floor, and thus the fleas will easily reach the upper body parts.

Fleas may bite your neck, but this only happens in major flea infestations. Again, flea bites on either your head, face, or scalp will mainly happen if you’re sitting or sleeping on flea-infested ground or near flea bedding.

Equally, you should know that sharing your bed or couch will a flea-infested dog or cat may also encourage fleas to attack your head and neck.

Fleas Prefer Cats and Dogs as their Primary Hosts

Fleas bites on human beings will mainly be instigated by human fleas, cat fleas, and dog fleas. Further, the flea bites on your skin will mainly appear in clusters or large groups. If you’re overly sensitive to flea bites, you might get red bumps or hives.

Cat fleas rarely jump off the bodies of your household pets, including cats and dogs. So, it’s definite that fleas will always prefer biting pets over attacking humans since we don’t have body hair where they can hide.

Thus, fleas will hitchhike onto humans (fleas don’t stay on humans) – during which time they bite the human skin about 2-3 times.

When and Why do Fleas Bite?

Fleas detect the volatile organic compound (VOC) released from the human body, mainly due to body odor and skin flora, and can readily select their prey.

– Fleas will suck blood that’s about 15 times their body weight.

– The flea eggs have short spikes that’ll allow the bug to stick on its host strongly.

– After prickling the host’s skin, the flea injects saliva that acts like an Anesthesia. But the saliva may trigger allergic reactions in both humans and pets. Related: Reliable Roach Killers.

So, if you’re wondering, flea bites will mainly be small red dots (which may progress into large patches of redness) that arise from skin injury and allergic reactions due to the flea bite.

Definitely, after a flea bite, a cat, dog, or human being will scratch their itchy skin, and this may result in infections.

How Do Fleas Bite Humans?

Fleas use their specially developed mouths to bite the human skin and suck blood from their capillaries. The mouth has 3 key stylets that are shaped like some tiny needles.

Fleas find a good site for biting on humans using the labial palps. Next, the insect pierces the skin in what’s known as exploratory probing. Related: Best Bed Bug Steamer.

Two parts of the mouth will bite the human skin cutting it to suitable blood vessels. The insects introduce the anticoagulant saliva to assist in locating human blood.

Then, the fascicle or epipharynx (needle-like stylet) will go into the capillary and suck blood. The probing process will lead to lesions clusters due to biting reactions.

The flea’s maxillary laciniae readily pierces the human epidermis. The middle epipharynx tip goes into the blood vessel, enabling the blood to move up into their fleas body.

The insect has muscles on its fore-gut that’ll easily contact to produce some suction force and pump more blood into the flea’s body. The blood meal travels easily via the esophagus, and it’s mid-gut ready for digestion.

Finally, once the flea has a good blood meal, it’ll open its 4 salivary glands and release some anticoagulant into the human body through the needle-like mouth-parts – this prevents blood clotting.

The fleas’ salivary glands are placed in their abdomen, and thus only long ducts will link it to the insect’s mouth.

During the blood-feeding process, the glans will open and drop saliva on the tissues around the wound on the human skin.

The anticoagulant in the flea’s saliva tends to imbibe blood. The saliva will also soften and spread the human skin tissues, allowing effortless insertion and equal removal of the flea fascicle.

So, fleas are vessel feeders as contrasted to bugs that are pool feeders. The human’s blood pressure benefits the flea to allow faster feeding – leaving limited or no hemorrhage.

If the insect is disrupted during the feeding process, it’ll jump off the human or pet host and only come back to another site shortly. Thus, flea bites on humans will result in multiple nearby bite spots.

Once the flea has imbibed enough blood, the pro-ventricular gut will behave like a valve and hence hinder blood regurgitation chances.

The pro-ventricular gut sprays the ingredients and digestive enzymes necessary for blood digestion. Blood will be digested in the mid-gut that looks like a sac, and later the contents move to the hind-gut.

But female fleas will digest the host blood faster than the male fleas – this is interpreted because the females need more energy and nutrition to create and lay flea eggs.

Fleas bites on humans appear like small and reddish dots that exist in 3-4 clusters or groups. The dots will have some light halo or redness surrounding them.

The bites and redness will mainly be found around the lower part of the human body – ankles, feet, lower legs, calves. However, if left alone, the fleas will move all over the body biting more parts of your skin.

Bites are tiny but have a red spot at the center – but when clustered, the bites will create a scab or line that’s also irritating and painful to the person.

Are Flea Bites Dangerous For Humans?

The CDC states that human fleas don’t carry diseases that can infect humans when bitten. But these fleas may act as intermediate hosts for some parasitic tapeworms.

Flea bites can cause Murine typhus in humans, mainly carried by rats and transferred to humans by fleas. Fleas defecate around the bite area, leaving the Rickettsia Typhi bacteria.

As noted earlier, cat fleas love pet hosts, including cats and dogs, compared to human hosts. However, cat fleas will also bite humans and cause diseases such as typhus, cat-scratch conditions, and plague.

Murine typhus in humans will be known by signs such as body aches, nausea, fever, and headache. In the first week, you’ll see some rash on your body, legs, and arms.

Untreated Murine typhus will lead to other diseases like kidney disease and diabetes.

Bites from Chigoe fleas are equal dangers to humans as they’ll lead to infections or sometimes amputation.

Chigoe flea can cause Bartonella henselae that’ll trigger a scratch fever, particularly in cats and kittens. You’ll notice the occurrence of this condition if the cat is lethargic or vomiting.

These fleas leave a wound that can attract infections and diseases. However, Chigoe fleas won’t carry any diseases as the other cat fleas do.

The fleas will transmit the cat-scratch disease to humans through bites or the cat when they scratch, lick, or bite a human being’s skin – particularly around scabbed or wounded skin areas.

Bites from Oriental rat fleas will lead to the bubonic plague or  Lyme disease in humans and dogs. Mycoplasma haemofelis will be transmitted through bites from oriental cat fleas.

Mycoplasma haemofelis will infect the red blood cells, which will eventually cause anemia in humans and pets, particularly those with weaker immune systems.

Antibiotics can be used to treat Mycoplasma haemofelis, but pets, including cats and dogs, should be given a blood transfusion.

Fleas mainly emerge in the warm months and will bite the warm-blooded mammal to feed on their blood – the flea sprays for your yard.

Fleas, particularly cat fleas, will bite humans, cats, or dogs within seconds to a few minutes after landing on the host. Besides, the fleas will have sucked their full blood meal from the host within 10 to 25 minutes.

Does Baking Soda Kill Bed Bugs? Dealing with pests in your home can be costly and unsettling. Pests such as bed bugs replicate rapidly by laying 2 or 3 eggs every day, and if not tackled properly,...

Continue Reading
link to How To Unclog A Bathroom Sink Drain?

Could you be having a stuffy or clogged bathroom sink drain? How would you go about it knowing well that this might be a little bit frustrating, especially for the first encounter? Should you call a...