Spider bite vs. mosquito bite? Differences? Well, such a task requires some keen eye and sufficient knowledge. Most bug bites have similar symptoms: itching, pain, sores, and red bumps. But how do you know which bug bit you? 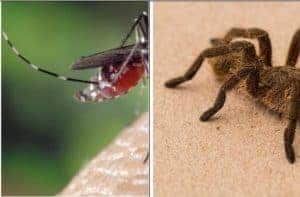 Some spiders such as brown recluse bites and American black widow inject venom into a person’s skin and cause allergic reactions and poisoning.

Loxoscelism is due to recluse spiders, Loxosceles spp. Symptoms include vomiting, fever, and headache. Latrodectism is due to widow spiders.

The spider bite has no significant difference from a mosquito bite, but it could hurt and itch more. Some of the spider bites could cause some ulceration. But first: Check a Video on Mosquito Sucking Blood

If you feel joint pain, nausea, fever, or dizziness following a spider bite, you might be at risk of venomous toxicity. You will need to visit your doctor immediately for a diagnosis.

Mosquitoes have a long proboscis that allows them to suck blood from your body. Also, the mosquito’s saliva has extraordinary enzymes that will numb your skin while it is biting.

The enzyme also prevents the blood from clotting, and the mosquito will quickly draw it from your body. Check these mosquito killers.

After the bite, your body creates a histamine response from the mosquito’s saliva. Mosquito bites are critical causes of diseases such as Zika and West Nile fever.

There are some know cockroach predators that can help you keep off those chemical roach killers and also cut on the pest control costs.  On what animals eat cockroaches; they include some...

Pestpolicy.com is a participant in the Amazon Services LLC Associates Program, an affiliate advertising program designed to provide a means for sites to earn advertising fees by linking to Amazon.com.