Your top termite killers will fail if you don’t accurately know the physical appearance of termites. It might also help to understand the termites vs. ants and how to tell them apart.

But don’t also confuse them with fire ants or carpenter ants. So, have you noticed some cylindrical, dry, and brown tunnels around the house or yard? Well, these are signs of an ant infestation- maybe dry-wood termites or subterranean termites. But what does a termite look like?

In short, termites are hemimetabolous insects that are 1/4 inch long (for subterranean) to 1/2 inch long for (dry woods and damp woods), have a pair of wings (both of equal length), straight antennae and soft body, thick waist, and short legs.

Despite that swarming termites are mainly darker while worker termites look lighter – termites’ color will be anything from white to light brown. But western dry-wood termite will have reddish-brown heads while western subterranean come with yellowish heads.

The termite’s life cycle and the colony have three castes – (1) reproductives, (2) soldiers, and (3) workers. Every caste has unique features that enable them to perform their colony roles effectively – Pesticide Worker Safety. 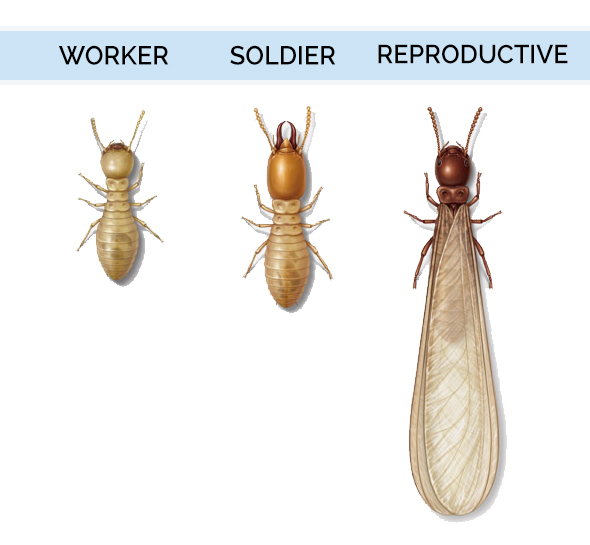 Image Source: OrkinBeing hemimetabolous, all termites, including their nymphs, will be involved in social activities, are assigned roles. However, pheromones affect which soldier termites grow into reproductives or workers. 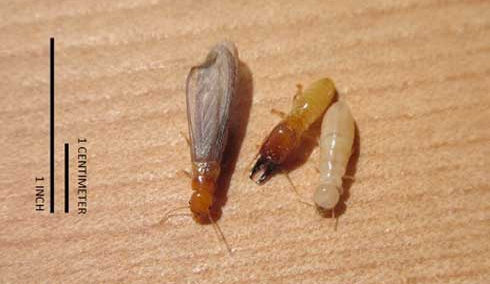 1. Reproductive (or the Termite Alates)

Reproductive or Alates have compound eyes with sclerotized cuticle, which makes their eyes look relatively brown.

But reproductives exist as alates, de-alates, king & queen, and the neotenic. In their development phases, have wing stumps, wings, and wing buds.

Alates are the winged and young termite swarmers – both male and female. The alates are the reproductives that’ll leave their nest to start other colonies. It may take about four years for a termite colony to produce new swarmers.

Appearances: Both females and males have a body size of about 1/4 – 1/2 inch and have grey and pale brown wings. Drywood Alates will have 3+ veins on their wings while the subterranean termite has just two such veins.

During this time, roughly 100-1000 termite alates will larvae their colony, go mate, and colonize other locations. The developing termites will mate and finally settle on favorable locations such as rotting tree stumps where they’ll raise their colony.

Both female and male alates will lose their wings following their swarming expedition and landing—the process called deciduous – where the termites will drop off their wings when they finish flying.

In this process, the termite’s suture tends to de-alates (drops off), leaving behind a permanent scale. Then, the male termites start searching for a female partner while seeking a location to colonize.

To start with, just a limited number of eggs will be laid and reared by the female termite de-alate.

With time, there will be an increase in workers that’ll assist the queen intending the colony’s brood. Within 3-5 years, the colony will be too large for practical survival.

As I’ve noted above, the alates will lose their wings immediately. They settle down in their new colony 0- becoming what we’ve called the de-alate. However, the de-alates swarmers quickly now change into new termites called king & queen.

Next, the queen will reproduce to generate the three forms of termite casts we’ve named termite workers, termite soldiers, and the termite reproductive.

Surprisingly, the termite queen can lay about 1,000 eggs each day. Also, the queen can live for up to fifty years. However, the queen will increase the number of eggs it lays to avoid overworking the alates.

Next are the  Neotenic reproductives that are termites with juvenile features allowing them to easily replace the queen & king (the termite’s colony’s primary reproductives).

The Neotenics will have wings having an equal length (2 pairs), and the wings will be almost equal to the body of the termite. However, these Neotenic swarmers have straight antennae, a straight abdomen, and two body segments.

Soldier termites will work hard to offer protection to the whole termite colony against enemies or intruders. Just like the other two termite castes, soldiers are effective in their working in the colony.

The soldier termites are infertile and thus will solely work to defend their colony – being guardians and fighters. They’ll employ their large mandibles and armored heads to fight their enemies.

Besides, soldiers provide early warnings whenever the colony’s security, such as the walls, is compromised. In such cases, the termites will create phalanx to block off possible intruders.

With their saw-toothed jaws, workers termites are highly destructive – they’ll shear any wood.

Continue Reading
link to How to Get Rid of Gnats: Once & for All